Partnership on groundnuts lifts farmers out of poverty

The one-year project is funded by the International Fertilizer Development Center on behalf of the 2SCALE programme consortium. The overall goal of the project is to incubate and accelerate inclusive business partnerships through partnerships and producer organizations that want to build commercially viable strategies in African food industries.

These strategies are based on mutually beneficial relations with smallholder farmers and other local micro-, small- and medium-sized enterprises (MSMEs) and/or by serving local and regional base-of-the-pyramid (BoP) markets with nutritious food products.

Mr Peter Magana and Ms Priscillah Gakii are two farmers who have invested in groundnuts in this expansive semi-arid region with good climatic conditions for growing the crop and they are hoping to benefit from this partnership. However, they face several challenges that the partnership is addressing, with a reasonable measure of success so far.

For the past five seasons, Mr Magana has grown traditional varieties of groundnuts on his three-acre piece of land but has been forced to feed them tohislivestock because he is yet to earn the return on his investment on the nutritious crop.

He was even considering looking for an alternative way to utilize his land until his expectations were raised through the intervention of this new partnership that he hopes will lift him out of poverty. Mr Magana’s concern has been the lack of clean planting materials to boost production, and lack of access to extension services and markets.

Ms Gakii had abandoned growing sorghum and opted for groundnuts on her two-acre farm because of its cheap production costs, hoping to earn a decent income. But just like Mr Magana, she faced challenges in earning a decent return from her investment in growing groundnuts.

Now Batian Nuts Ltd, Egerton University, Kilimo Trust and 2SCALE, the largest incubator for inclusive agri-business in Africa, have partnered to address the challenges the farmers in Tharaka Nithi are facing with the goal of turning around their fortunes.

The one-year groundnut project aims at supporting smallholder farming households and other value chain actors in Tharaka Nithi and Meru counties of Kenya to take advantage of opportunities available in the groundnut value chain in the region.

The four partners are working to close this yield gap by promoting improved varieties that meet end-user demand and address key challenges including accessibility of seed, markets and cost associated with shelling, which farmers say is very high.

Batian and the Njoro-based Egerton University are training farmers on seed production and grain production for the market. When she ventured into groundnut farming, Ms Gakii planted the crop in her two-acre piece of land in Tunyai location, Tharaka Nithi but come harvest time, her expectations were dampened when she only managed to harvest only 900kg, which she sold to middlemen at a throwaway price of Sh40 per kilo.

However, even as she put all her energy into growing the crop, she was not sure where she would sell the produce once it was ready for the market.”I had taken a Sh100,000 loan from a local bank and I am now stranded as I fear the bank may attach some of my few movable assets I used as collateral to secure the loan,” laments Ms Gakii.

Apart from the seed and market challenges, some farmers like Mr Anthony Gitonga were shocked when their produce was rejected by a local agro-processing firm for containing high levels of aflatoxin. “I was shocked when my 3,000 tonnes of groundnuts was rejected because it had a high level of aflatoxin. I was told that it was unfit for human consumption. I could not believe my ears when a sample was tested and the results left me in a state of bewilderment.

“I had invested all my resources in cultivating the nuts but nobody came to tell me what agronomical procedures I should follow to avoid aflatoxin infestation,” says a dejected Mr Gitonga from Mukothima village, also in Tharaka Nithi.

These are some of the tribulations that hundreds of farmers in semi-arid Tharaka Nithi and parts of Meru counties go through in their attempts to break the chain of poverty by planting the crop.

Batian Operations Director, Mr James Muhoro, notes that the challenges with traditional varieties are that they are small-seeded, low-yielding and require more labour. Besides, the poor agronomical processes farmers employ has seen most of them record massive losses, as their produce is rejected due to high aflatoxin levels.

After the new varieties from Egerton University were introduced, groundnut production has since improved significantly in the region. “With the introduction of the new varieties, the prices have improved. The farmers and buyers love it because it is big-seeded, requires less labour during harvesting and shelling and yields more nuts. This has seen the number of farmers seeking seeds to plant the crop rise,” he adds.

Farmers in Isiolo, Embu and Murang’a counties have approached the firm to grow groundnuts as they have a ready-made market and are assured of extension services and quality seeds.

According to Prof Paul Kimurto, a crop scientist at Egerton University, the biggest challenge farmers face is lack of clean seeds, access to markets and low prices. “It is now possible for the farmers to break even as the university has developed a drought-tolerant and high-yielding groundnut variety known as CG7. All that the farmers need is support from key stakeholders to produce more,” he advises.

“This is a win-win situation as Batian will buy the groundnut to reduce aflatoxin contamination and for increasing shelf-life while farmers will access clean planting materials from Egerton University to boost their production,” says Prof Kimurto.

Batian hopes to replicate its successful approach in macadamia production to step up groundnutsand cashew nuts production through Afrimac Group which serves more than 11,000 smallholder farmers. AfrimacGroup is a consortium of five companies – Afrimac Nut Company, The Village Nut Company, Jumbo Nuts Ltd and Sagana Nuts Ltd. The group exports its products to the US, Europe and Asia.

In 2019, the company paid farmers more than Sh60 million for about 450 tonnes delivered. However, in 2020, production was disrupted following the outbreak of the COVID-19 pandemic.

The area under groundnut cultivation is rising in the region. From an initial 70acres, the company projects the acreage under the groundnut crop in Tharaka Nithi to reach 500 acres in the next five years. At least 100 farmers are engaged in the venture but the company is targeting 2,000farmers.

Batian has invested in a ground nut tree nursery and acquired land to set up a groundnut processing plant which is expected to be operational by the end of 2021. Mr Muhoro says Batian has invested heavily by setting up a modern aflatoxin testing laboratory as peanuts develop high levels of aflatoxin if they are not well taken care of.

“We follow the farmers from planting to harvesting to ensure that they observe strict agronomic practices. Harvesting is a critical time. We have received modern aflatoxin testing machines from Kilimo Trust through the support of 2SCALE. All the nuts we buy from farmers go through a strict testing regime,” says Mr Muhoro who was a manager at Kenya Nuts for 18 years.

He adds that to get the aflatoxin-free nuts from the farmers, the company seeks to introduce improved production, harvesting and post-harvest innovations at the farm level and the factory.

“We are keen on groundnuts as it is a key component for nutrition, food and income security. We are partnering with Egerton University and 2SCALE to ensure that farmers have access to clean seeds to accelerate the agri-business and create job opportunities for the youth in the region through mechanisation services, seed suppliers, agri-chemical and extension services.”

He observes that post-harvesting equipment such as driers and shellers are critical, so that Batian gets aflatoxin-free produce for the local and export market.

Agronomist Harun Mbogo is of the view that many farmers end up harvesting aflatoxin-contaminated groundnuts after failing to adhere to strict agronomic procedures from planting to harvesting and post-harvesting.

“Spacing of groundnuts should be 45cm between rows and15cm between the plants. This will give a farmer a population of 60,000 plants per acre, which translates into high-yield and more income. Farmers should do proper moulding of soil during the first weeding, with additional moulding in the second weeding,” adds Mr Mbogo.

The farmers, says Mr Mbogo, should harvest when the crop has matured and remove pods and dry them on canvas for five days followed by winnowing to remove the soil on nut which has aflatoxin causing pathogen.

Batian has received inquiries for extension services from farmers in Isiolo who have abandoned tomato and onion growing and want to embrace groundnut farming due to a ready market.“We have 40 acres for seed multiplication to supply seeds to other areas like Turkana, Machakos, Embu, Taita Taveta and Isiolo counties,” shares Mr Mbogo.

Most farmers are now embracing high-value crops such as groundnuts, ditching unprofitable traditional crops like maize and beans. Groundnuts are an excellent source of cooking oil and animal feed. It is a staple food and can provide a valuable source of proteins, energy, fats and minerals.

The groundnuts farmers assisted by the project have benefited significantly from the funding provided by the International Fertilizer Development Center on behalf of the 2SCALE programme consortium. 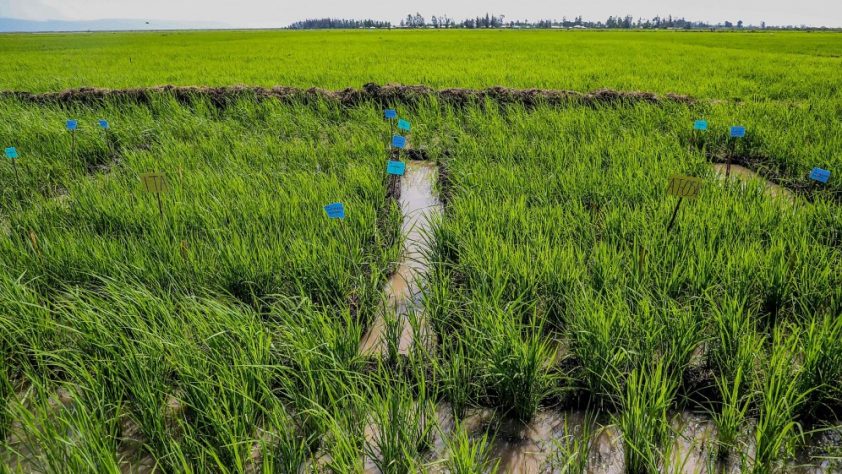